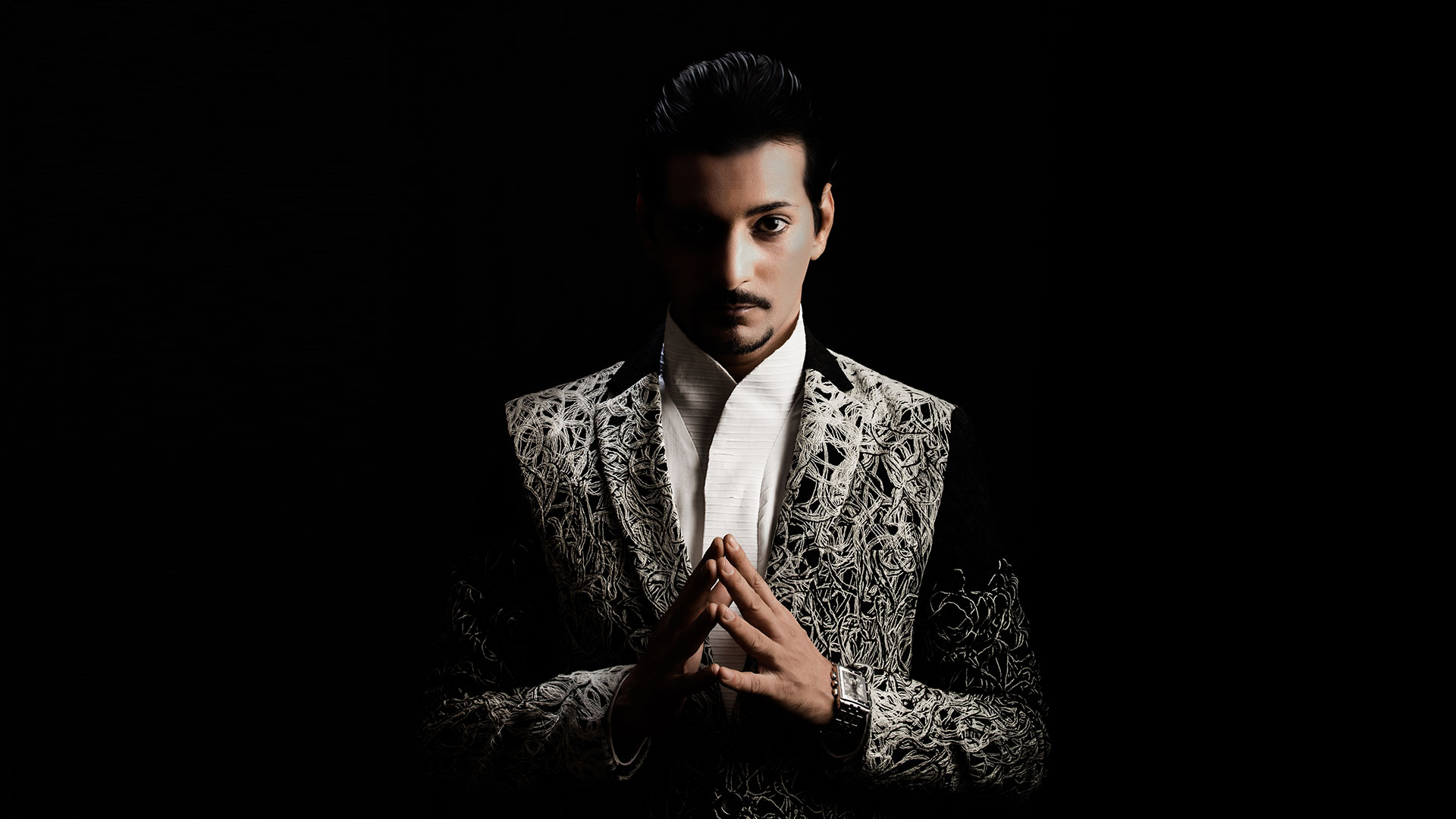 The Making of The Emperor of Magic

Born and raised in a family of magic, Ugesh was used to seeing his dad in the limelight. Prof. M. C. Sarcar, a pioneer in his own right, played a huge part in his son's choice to pursue magic as a career. Show business is in Ugesh's blood, debuting on stage as his dad's assistance quite early in his childhood.

One day, as Prof. M. C. Sarcar's show was winding up, a friend and minister has this conversation with young, eight year old Ugesh:

Minister: "So, beta, what do you want to be when you grow up?"

Ugesh: "I will be the next biggest name in magic!"

The enthusiasm in that young eight year old's claim made the grown ups laugh heartily, but we all know the reality of that audacious claim.

Yet there are those who actually dream the dream and have what it takes to make that a reality. Ugesh Sarcar is one such individual.

He stuck by his eight year old self's challenge and worked at mastering human psychology for a period of fifteen long years. Whilst many take the route of colleges, degrees and even PhDs to earn this mastery, Ugesh took a unique approach.

His attitude has been the same since the beginning. Like he says, "If you're going to do something, you better make sure you're the best and not amongst the rest."

Ugesh explored the human mind in the every day lives of people. He worked in various fields, such as marketing, selling, memory enhancement, medical transcription, call centres and more. Having studied in a simple Montessori school, he claims his English was terrible, until he embarrassed himself in front of a girl and challenged himself right then and there to learn better.

Excellence is another one of Ugesh's traits. Whilst many of us grow comfortable in a steady, well paying job, even though we may have started it with the intention of it being just a stop on the road to our true destination, Ugesh would take up a job, rise quickly to the top and quit when he had learned all that he could at that place. He would then take up another job in another field, and start at the bottom to repeat the process all over again. The objective, as he states, was to understand how people from different socio-economic backgrounds, cultures, mindsets, etc. would behave when faced with problems or opportunities, as life would have it.

Once he was satisfied with his mastery of the human mind, he dedicated himself to his true passion: The Art of Magic. He spent close to eighteen hours a day for almost three years, with bare minimum interaction with people or food, just isolated within his home, perfecting every nuance.

Equipped with his mastery of the human mind, a set of useful skills in his tool box and confident in his ability, Ugesh was ready to reveal himself to the world. He knew that the art of magic was dying in India and he wanted to bring it back with a bang.

The quickest way to reach the masses, as Ugesh figured, was through television. After making his pilot video, he began his hunt for the best channel.

At one of his meetings with a channel, which happened to be a stone's throw away from his dad's academy, the All India Magic Academy Trust, Bangalore, he was offered the large sum of Rs. 2000 per episode.

Now, let's remember that Ugesh is a person who likes to win. At this juncture, most common magicians would have leaped at the opportunity. Especially those who had never before performed anywhere, let alone in front of a camera with live televised audiences. Here was the proof that magic as an art was no longer respected by the people in our country, including the magicians themselves, who had developed the attitude of take what you can get. Not Ugesh though. He shunned their offer and even banned the channel representatives from ever entering the Academy's building!

After many more meetings, his last was with UTV Bindaas, and finally the world was introduced to India's First and Ultimate Street Magician, Ugesh Sarcar. His show, Ugesh Sarcar's 3rd Degree was an instant hit, going on to run for a period of over four years and amassing millions of followers. The show had a whopping one hundred and forty eight episodes, holding the world record of the longest running television show on magic in India, and was later sold to the OTT platform, Netflix.

Now, the youth had caught on and Ugesh's objective of bringing back the art of magic into the limelight had begun.

Ugesh had by now achieved his first step; reintroduce the country and world to the amazing King of Arts, Magic.

The next step was to explore the various opportunities the world was laying at his feet. His passion to create history enabled him to successfully integrate magic within various industries.

He became the first magician to integrate magic with a product from the brand Parle, namely Parle Full Toss.

He was the first to integrate technology and magic in one of the commercials for Parle Full Toss.

This advertising revolution spread and many more companies took up Ugesh's unique services to add the M-factor to their product launches as well.

Bollywood also wanted in on this. Ugesh trained the Baadshah of Bollywood, Shah Rukh Khan in the art of flourishes for the title track of the blockbuster movie, Don 2. Next up was integrating magical illusions in a movie and training the actor in the presentation style of a magician. This he did in Sanjay Leela Bhansali's superhit movie Guzaarish starring  Hrithik Roshan and Aishwarya Rai Bachchan. Ugesh was the Technical Director for Magic, where he designed and executed all the magical acts seen and loved in the movie. He also trained Hrithik in the carriage and demeanour of a magician.

Soon after his television show came to an end, he appeared on the much loved celebrity reality show, Jhalak Dikh Laa Jaa, where he created history once more by becomign the first magician to integrate magic and dance with lyrics.

He wasn't done yet.

Always having been passionate about adding value to society, he started a social project called I Am Possible Magic, where he took on two differently abled individuals who came with lots of personal baggage, little or no knowledge of English, very poor backgrounds and no knowledge of magic. In a span of four months, he had transformed them into professional performers, who went on to put up live shows in front of international audiences, in English.

His vision was clear, "No matter where you put them in the world, they should not only be able to survive, but thrive."

Ugesh Sarcar is the first magician to bring the art form of Mentalism onto a commercial theatre stage with his super hit live show, Your Mind is Mine. His shows have travelled nationally and internationally, each time leaving the audience thrilled and rising to their feet for a standing ovation at the end.

The history of magic shows us it's origins in Egypt from where it came to India and flourished till the early 90s, which is when the art started it's decline. The West took up the art around the same time and it is now a multi-billion dollar industry there.

Magicians in India were barely making enough to sustain their households. The respect and reverence of the art and of the artist had been lost in transition. Many so-called magicians began taking advantage of the lack of exposure, extorting people with their untrained gimmicks and tarnishing the art. Copycats and crab like behaviour had become the norm and soon the art would be dead.

Ugesh's aim from the very beginning was to bring back this dynamic art form in India, increasing the standard of living for all the magicians throughout the country and putting integrity into the art and artist once more.

His first step was to show the masses that magic is still in trend which he accomplished with his television show. The next step is to popularise the modern art of Mentalism through his live shows, designed for the extremely intellectual audiences of this century.

Through his company, Mystician's Entertainment Private Limited he aims to bring order to the globally chaotic and fragmented industry by creating the world's first Empire of Magic.

Ugesh has much more to offer the world, so hold on to your seats and keep your eyes peeled for the next historical news coming your way from the Emperor of Magic, Ugesh Sarcar!